What is all the hype about Escargot, Is eating snails really that popular? Many people are still thinking of them as pests that crawl around and destroy our beautiful vegetable gardens, and they are right – they can be a menace, but they can be a delight too. With high numbers of snail-lovers and the demand for escargot constantly growing, it is likely they will become a solution to many diets in all parts of the world. Snail meat is high in protein and minerals such as magnesium and calcium, which makes it perfect food in nowadays nutrient-lacking vegetables, fruits and massively industrially produced meat. There are many edible snails types but you need to know what you are doing.

What is Escargot Anyway?

The term Escargot comes from French and it means snail. The plural form is Escargots.

This usually means a land snail that is cooked and ready to eat. Escargots are usually served as a starter but they can also be an entrée. They are a typical dish in France and in the Catalan region of Spain. The word Escargot sometimes applies to the living snails of those species which are commonly eaten in this way.

Did you know there is even a national escargot day?

There is no real difference between the word escargot and the word snail. While in French it will mean the exact same thing, the actual animal, in the English language it will mostly depend on the context. Meaning, in restaurants you will probably see the word Escargot. On the other hand, you will likely not refer to one you see in your garden as such.

How to Pronounce Escargot

Since the origin of the word is from the French language, it might be difficult for an English speaker to say it for the first time. It should be said as eh – skaar – gow. Try listening to the video below and keep in mind you don’t really pronounce the letter “t” at the end.

The History of Snails as Food

It is unknown exactly when humans started eating snails. Researchers found leftovers of shells inside a cave in Greece and in other places. These findings suggested they were eaten even before humans started hunting. The reason behind it is simple. Compared to other animals, they are slow, lack good defense mechanisms and are easy to handle. In addition, they are very easy to farm and have great nutrition value.

As food, snails have great nutrition value. They are high on protein and low on fat. Nevertheless, they are often cooked with a lot of butters, so keep that in mind.

You can see the table below to compare to other common types of food.

While it is very difficult to explain taste, they usually capture a lot of the flavor of the sauce they are cooked in (or with). People often say their texture resembles the texture of clams. The common comparison of their taste is to the taste of chicken, fish or mushrooms.

Because of their anatomical structure, you cannot simply take a live snail and eat it or cook it. Before they can be eaten, they need to go through a cleaning process. The cleaning process is basically leaving them alive for 8-12 days without food. That way their digestive system is clean. They are then being thoroughly washed and ready to be cooked, frozen or canned.

How to Eat Escargot

Snails are being eaten around the world. Each county has its own way and recipes. The recipes are very influenced by the species lived locally. Check out our 101 different recipes. While the world’s most known dish is Escargots de Bourgogne, there are a lot more to try.

Most recipes will require you special snail tongs (for holding the shell) and snail forks (for extracting the meat). They are usually served on indented metal or ceramic trays with places for six or 12 snails.

Because of the rapid way they reproduce, some countries have strict regulations about selling live ones. In the US, it is illegal to ship and sell live snails. Your best bet will be to find them canned (can be found online), frozen in special stores or in places like Peconic.

Which Types are Good for Escargot

With over 40,000 different species, you cannot simply eat or cook any snail because some could be bad for you. The most common species is the Roman snail (also known as Burgundy or Helix pomatia). Other edible snails include Cornu aspersum (garden snail, known as petit-gris), Helix lucorum, Cepaea nemoralis, Otala punctata and others.

Which Countries Consume the Most Snails?

While some people still consider them to be pests and can’t imagine putting them on their plate, there are others who savor this delicacy and would never exclude them from their cuisine. There are countries where eating escargots is embedded deeply in their culture and has a long history. Among the highest consumer countries are France, Spain, Italy, USA and Australia.

Jess is a fan of the good life. She is a licensed cosmetologist that enjoys fine dining, movies, books and the beach. Jess create content for Escargot World mainly about escargot, recipes and snail cream. You will rarely find her without an answer to your question. 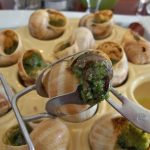 How to Eat Snails 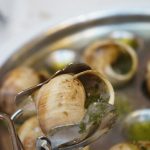