Many people are surprised to learn that snail’s anatomy has parts that are similar to humans. After all, snails and humans are so different. It might be even hard to think of an animal that is more different than us. They are slimy, fragile, small and slow. While we are relatively strong, adaptable and fast evolving.

In order to understand the anatomy of a basic land snail we can look at a land snail from the outside to the inside. 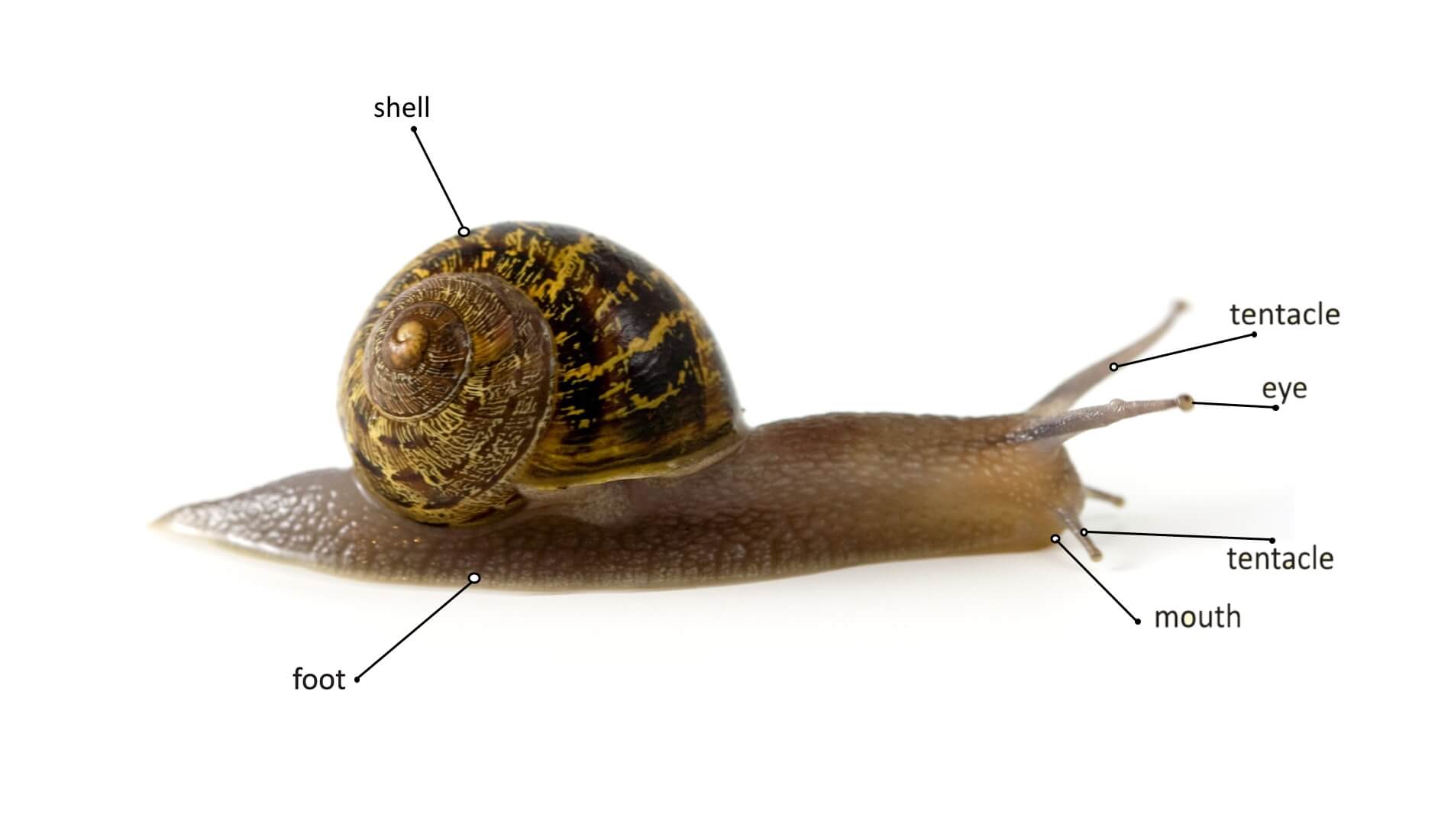 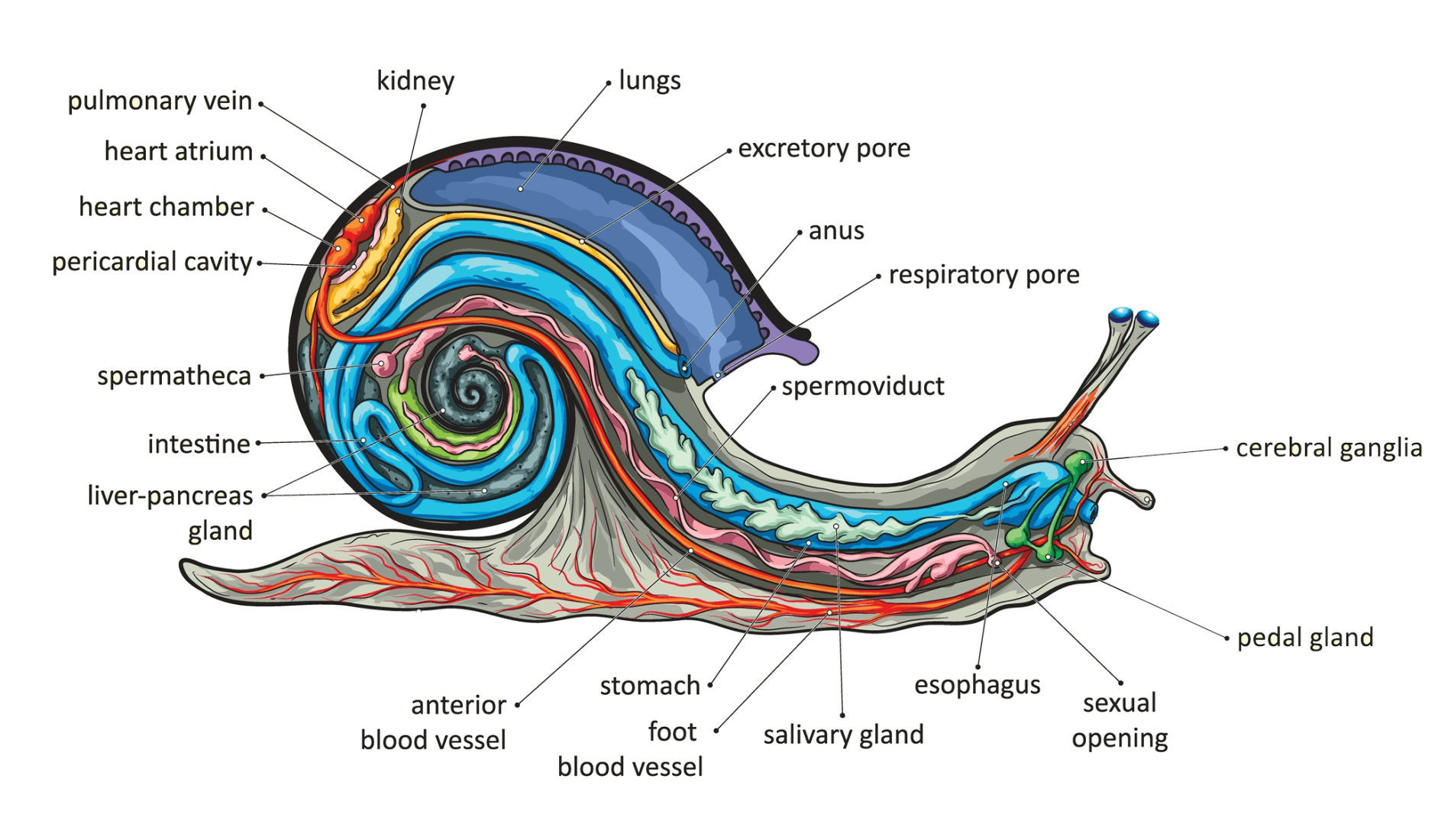 Snail Classification – Are Snails Bugs, Insects or What??

Snails are not bugs nor insects. On the Animal kingdom classification they belong to two different classes. The snails are gastropods class while the bugs and insects belong to the Insecta class.

The complete classification of the snails in the classification hierarchy is: Eukaryote -> Animal -> Eumetazoa -> Bilateria -> Protostome -> Lophotrochozoa -> Mollusca -> gastropods.

Gastropods class includes all types of snails, meaning land snails, freshwater and saltwater. It also includes slugs. In total, this class includes 65,000 to 80,000 different species. Their estimated age is about 500 million years.

The external shell is one of the first things you notice about the snail. It is also the main difference between a snail and its close family relative, the slug.

Different species have different shells. They are different in size, color and shape. But they all have a spiral design made of several whorls and consist mostly from calcium.

Snails are born with a small transparent shell. A baby snail will have a shell with only one whorl. As he grows up and his body gets bigger, so does its shell. They will add more and more whorls to fit the snail’s body.

See also  Where Do Snails Live?

The main purpose of the shell is to protect the snail’s internal anatomy parts that will be explained later. It is also the snail’s protection from predators. Whenever it feels danger, the snail will retract itself into his shell.

Some species will use the shell as a protection from unsuitable weather conditions. Depending on the snail habitat, if it is too hot or too cold and dry, they will go inside the shell. They will seal the opening of the shell with some kind of mucus that will become hard and protect the delicate body temperature and humidity.

Since the shell is made mostly from calcium, the snail requires a lot of calcium in its diet. The consumption of calcium helps the snail to have a bigger and harder shell. It is also critical in cases where the snail has a damaged shell.

Snails do not have legs. But they do have something that is called the foot. The foot is basically the bottom part of the snail’s body. The snail is using his muscular foot to create small wave motions of contractions and expansions in order to move around.

During their glide, the snail will reduce the friction by creating mucus. That mucus has many amazing abilities that allows a snail to move completely vertically without falling and even crawl over a sharp blade without damaging its skin.

You can usually see the mucus as it dries because it becomes a sort of a shiny trail. Snails can pick up on those trails to find other snails for mating purposes.

The head of the snail is located on one end of its body. On the head you will see the mouth and 2 to 4 tentacles.

A land snail will usually have two pairs of tentacles. Two at the top of the head and two at the bottom.

See also  How to Tell if a Snail is Pregnant

All of the tentacles are retractable which mean the snail can pull them back when he needs to or when he senses danger. They also have tactile receptors which mean they respond to light touch.

Snails have eyes located on the tip of its top tentacles. It is still unknown exactly how much the snail can actually see. However, studies and experiments proved that the snails can respond to light and to some degree, see what’s in front of them.

Similar to humans, the eyes of the snails also have a retina, lens, and optic nerve.

The mouth is located in the bottom part of the head. Unlike humans and other animals that have jaws to chew their food, inside the snail’s mouth there are rows of microscopic teeth called the radula. Instead of chewing, the snail is practically scraping his food. The small scraps of food then continue to the digestive tract.

Despite the small size of a snail and its tiny teeth, it is actually possible to hear the sound of food scraping inside the radula.

Snails do not have a spinal cord or a single brain like humans or other animals. Instead, they have what is scientifically called cerebral ganglia. The cerebral ganglia is divided into four sections. Each section has its own responsibility for the “operation” of the snail. Kind of a simpler version of a brain.

Still, with this simple brain, the snail shows signs of associative learning capabilities.

The mantle is a muscle that protects the internal organs of the snail and also connects the shell to its body. In most cases, you will be able to see the mantle just outside the shell and it will appear as a layer of skin.

The mantle has a critical part in keeping the snail healthy and functioning. Damages to the mantle known as: “mantle tear” or “mantle collapse” can be life threatening for a snail. Those issues can be caused if you pick up a snail by its shell when it is “sticking” to a surface. But it can also happen for other unknown reasons.

Mantle tear is the less serious condition of the two. With a tear, the snail can still move around almost unaffected. The tear will heal itself in a short period of time.

However, mantle collapse is another story. With mantle collapse, you will see the snail struggling to move around. You will be able to see inside the shell, which you can’t in a normal situation. There are cases where a snail can recover from mantle collapse but in most cases, they will unfortunately die in a few days.

The mantle is not a unique feature of snails alone. There is actually a known question that goes “a land snail, a clam, and an octopus all share:” and the correct answer is that they all have mantle.

Land snails are mostly hermaphrodites. This means that each snail has both the female organs to create the eggs and the male organs to produce the sperm. Technically, a snail is capable of reproducing without a partner. However, most snails will choose to do it with another snail of the same species.

The reproduction of snails is a very interesting process to say the least. They also have an act unique to them where they shoot each other with a dart!

The digestive mechanism of the land snails is a simpler version of humans. The scrapes of food that enter their mouth is going to their stomach. After being processed, the waste is exiting the anus.

The snail’s heart is located in the heart bag and it has two chambers. The heart, like in other animals and in the human body, is responsible for keeping the blood circulating between the organs.

The heart bag has another part. It helps the snail dispose of material that the snail cannot digest. 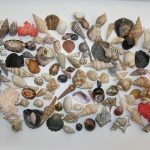 All About the Snail Shell: Answering Your Most-Asked Questions 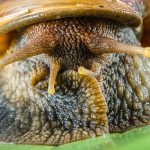 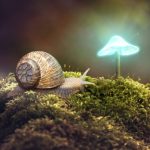 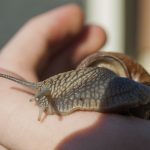 Snail Bite – What to Do? How to Treat?