Quite a few snail species go by the nickname ‘ramshorn snails.’ Most people use the term to talk about a freshwater aquarium snail that can either be a pest or a welcome addition, depending on how you look at it. (And how well you maintain your tank.)

It can also be the name of any aquatic species from the Planorbidae family.

How about we break down the complicated ramshorn snail world and make things a little simpler?

What are Ramshorn Snails?

As previously mentioned, there are a few different species of gastropod that use the same name.

If you are an aquarium hobbyist, you are likely talking about one of the following:

Confusingly, the Colombian ramshorn comes from a different family entirely. It isn’t from Planorbidae like the Seminole and great ramshorn; it’s from the Ampullariidae family instead.

I did tell you; it’s confusing!

Just like many species that have integrated into the pet or hobby trade, ramshorn snails have been specifically bred to look different from their original forms.

In the ‘wild’, Seminole ramshorn snails are brown. They can be different shades of brown, but they are still mostly brown.

Because of the high interest in the pet trade, more colors of Seminole and other ramshorn snails have now been bred, including purple, green, orange, red, leopard-print, blue, pink, and pretty much every other color in between.

The actual body of the snail, also known as the foot, is usually very dark – black. There are some that are red in color, however. These are not actually red; they are just missing melanin in their skin. The red you can see is actually the snail’s blood.

The shell looks like a ram’s horn – just as the name would lead you to believe. It’s conical but flattened. This is one of the things that lures people in and encourages them to add the species to the tank: it is quite unusual and visually attractive.

How Big Do Ramshorn Snails Get?

Seminole ramshorn snails are usually quite a bit smaller than great ramshorns. The latter is the largest species of ramshorn found in Europe.

Adult great ramshorn shells can grow to 1.4 inches (3.5cm) across.

Ramshorn snails grow quickly when they have enough food. They are very adaptable, so it doesn’t really matter if the conditions aren’t quite right for them. Not only will they grow quickly, but they will also breed quickly too.

It is easier than you’d think to develop a snail infestation in your aquarium at home.

How Long Do Ramshorn Snails Live?

Most ramshorns don’t live for longer than a year, perhaps two if you’re super lucky. That’s one of the reasons why they reproduce so prolifically, and what makes them a potential pest and invasive species when they are not welcome.

What Do Ramshorn Snails Eat?

This gastropod will consume all the algae in your tank if you let them, alongside leftover fish food, fish poop (detritus), decomposing plant and animal life, and more waste. That’s a good thing; it means you’ll need to do slightly less algae and microfilm cleaning.

If there is enough algae, waste and leftovers in the tank for the number of snails you have, you shouldn’t need to feed them anything extra.

If there isn’t and your snails are getting hungry, you can feed them supplement items such as algae wafers or pellets; a little extra fish food; or blanched, frozen, or fresh green vegetables.

If there is too much food in the tank, your population of ramshorn snails will boom dramatically. If you start seeing a lot of snails, it’s a pretty good sign that you’re overfeeding the tank’s inhabitants.

I have good news and bad news.

The bad news is: yes, ramshorn snails will eat your plants.

The good news is: they won’t eat them until they’re dead!

As a general rule, ramshorns won’t eat live plants in the tank. If they are dead, dying and/or decaying, the snail will gleefully lap it up.

As well as snail-eating tank mates and aggressive fish, the shock of being transported from one place to another can be enough to kill sensitive gastropods. They are all quite sensitive to changes to water parameters and other factors, including temperature and stability. If they have been shaken around (by accident) during the delivery process, it’s common for them to be dead before they have even arrived.

The difference in water from the pre-shipping tank to the post-shipping tank can also make a lot of difference. That’s why you should slowly acclimate gastropods to a new habitat, with the drip-acclimation method.

Any kind of treatment, food, or medication that contains copper is likely to be fatal for your snail. If you do need to use a copper-infused product in the tank, you must remove and quarantine the snail until copper levels return to normal.

If you want ramshorn snails in your tank: no, they are not bad.

If you don’t want them in your tank, however: yes, they are probably bad (for you).

This species is great for eating algae on the glass and cleaning it up. You can watch them slither along from one end of their habitat to the other, consuming the microfilm and algae, leaving a clean trail behind them.

Sadly, because they breed prolifically, they can easily take over a relatively small aquarium. Not only that, but they can also easily hitch-hike into the tank on plant life, ornaments, and other additions and accessories.

No, this is a very peaceful snail. Most snails are, to be honest. (Apart from assassin snails, but those are very aptly named!)

You won’t find this snail fighting with others over food or territory, nor do they eat meat. They spend pretty much all their time slithering and eating or sleeping. Or, you know, occasionally mating.

Although not aggressive, ramshorn snails are aggressive and adept escape artists. They will try to escape at every opportunity, and if they can find a hole to get out of, they will. You MUST ensure there are no little escape routes for this slimy Houdini!

Yes, they are! This means they can switch gender when it comes to mating time, basically ensuring the continuation of their kind.

The snail has both male and female ‘parts’, and they can choose which one they want to be. If the tank contains all males, a few of them will switch to female to make reproduction possible.

(And if you think that’s weird, wait until you find out about the female snails that don’t need a man and create tiny carbon copies of themselves – like the Malaysian trumpet snail!)

It starts with two snails. If they are the same gender, one will switch to the other. They come together to mate, and when the female has been fertilized, she will lay approximately 10 eggs in a little cluster. You might be able to spot them on ornaments or plant life within the aquarium.

After a few weeks – 2 to 4 weeks, to be exact – the eggs hatch. It takes them no more than 4 or 5 weeks from hatching to be sexually mature themselves.

As you can imagine, with stable and ideal condition, this gastropod can create its own little colony very quickly!

These freshwater snails are very easy to take care of and are often recommended as a beginner’s snail.

You can keep a ramshorn snail in a tank as small as 2-gallons (9 liters), but a larger 5 or 10-gallon tank (20 or 45 liters) is preferable. More snails require more space. It’s always better to give them too much space rather than too little.

The pH level of your ramshorn’s water should be at least 7, and between 7 and 8. Too much acid will dissolve and damage the snail’s shell. When that happens, the snail is (usually) inevitably doomed.

Hard water is preferable, between 64 F and 86 F (18 C and 30 C). You will need to ensure that there is enough calcium in the water and provide calcium supplements if necessary. The snail will need this to maintain the health of their shell.

Can Ramshorn Snails Live with Guppies?

Yes, they can. Guppies are peaceful, and so are ramshorn snails.

You can also pair ramshorn snails with other snails, such as Malaysian trumpet snails, ivory snails, mystery snails, nerite snails, and more. Certain shrimp work well, too. These include red cherry, ghost, Amano, and bamboo shrimp, to name but a few. Freshwater clams are another ideal tank mate, and you can also pair this gastropod with catfish.

Can Ramshorn Snails Live with Goldfish?

It isn’t a good idea to house ramshorn snails with potentially aggressive goldfish. The fish eat snails, so they will eat the ramshorn snail if they get the opportunity to. Not only that but aggressive fish can also cause damage to the snail’s shell. Minor injuries can be repaired, but if the crack or break is a major one, the snail will die.

It is also not recommended to house any snail with freshwater snail-eating fish. This includes loaches, gouramis, catfish, betta fish, rainbowfish, and bala sharks.

As a final note, tangerine lobsters and other freshwater crayfish should not be added to a tank with snails. They will attack and eat them. 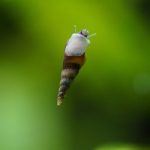 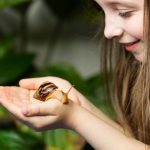