Most snails are not poisonous. You can safely touch them, keep them as pets or enjoy them as escargot. An exception to that is the deadliest snail in the world, the cone snail. This small marine creature is one of the most venomous creatures in the world. Usually hunting fish and worms but also harm humans when it tries to defend itself.

Cone snails are water snails usually found in all tropical and subtropical seas. There are over 500 species of cone snails, all of them are poisonous. Most of them enjoy the warm water but some species adapted to the colder water of the Mediterranean or southern California.

They have beautiful patterns and colors on their cone shaped shell (hence the name). Their unique look attracts nearby divers but they should never be picked up, even if you think it’s an empty shell.

In order for them to hunt, they usually place themselves in shallow reefs and try to cover themselves with sand or under rocks and coral.

When a fish is nearby, they shoot their long harpoon and inject the venom into the prey. The poison can kill the fish but its main objective is to paralyze the prey. In seconds, the fish become paralyzed and unable to move. The cone snail then pulls the fish and swallows it whole.

A similar scenario is for people who try to pick up a live cone snail. While the snail does not intentionally try to attack humans, it will do it as an act of self defense.

Medical treatment for the poison

As said, cone snail venom is dangerous to humans as well. It is categorized as neurotoxin which can cause first swelling in the location of the stung, followed by other symptoms such as pain, nausea and numbness. Unfortunately, depending on where the person was stung, the cause can be even more severe such as paralysis and difficulty in breathing. There are documented cases of deaths as well.

There is no antivenom for the cone snail poison. The main course of treatment will be treating the symptoms and allowing the body to fight off the poison.

Are there poisonous land snails?

There are no poisonous land snails in the sense that they contain poison. However, there are snails that can harm humans. Usually, that harm will be in the form of diseases that can be transmitted via touch or if it is eaten uncooked.

The Giant African Land Snail is a good example of such harmful snails. Due to its large size, it can be a carrier of different parasites, bacteria, lungworms and can cause meningitis.

While snail cream is very popular in cosmetics, touching the snail’s mucus or eating its meat without cooking is highly not recommended.

Pet owners are often concerned their dog or cat will eat snails in the garden. Both dogs and cats can easily break through the garden snail shell. However, there is not much concern about that. If you suspect your pet eat a snail, monitor its behavior for a couple of days. If you see anything alarming in the way it behaves, take it to the vet for a thorough examination.

Where Do Snails Live? 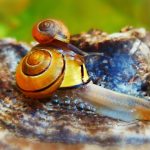 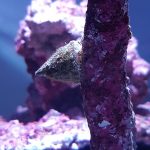