These marine snails aren’t from our planet’s lunar friend, but that doesn’t mean moon snails aren’t an out-of-this-world creature. Drilling for food, inflating like a balloon, and injecting victims with hydrochloric acid — these mollusks have a wide and interesting array of serial-killer-like talents.

Why don’t we take a closer look?

What Are Moon Snails?

The term ‘moon snail’ is a generic one, used for snails in the Naticidae family. There are several individual species, found in lots of places around the world — and they are constantly-hungry predators. This species might have a peaceful name, but it’s definitely not a peaceful snail.

Here are a few other mollusks from the same family:

Where Are Moon Snails Found?

The moon snail can be found all over the world, from cold Antarctic and Arctic climates to tropical waters, where they are more prolific.

What Do Moon Snails Eat?

Moon snails eat clams through a hole in the shell, particularly butter and horse clams. They will also feed on other clams, cockles, and occasionally other moon snails.

How Does the Moon Snail Feed?

This snail drills for food. The feeding process takes a r-e-a-l-l-y long time.

The snail uses the radula to drill holes in its prey’s shell, after finding clams and other mollusks by burrowing around in the sand grains.

From start-to-finish, it can take up to a whole week for this snail to feed on one clam. My dinner barely lasts me a whole minute.

How Do Moon Snails Eat Clams?

Once the moon snail has found a clam shell under the sand grains, it will inflate its muscular foot and wrap itself around its victim. This is the snail version of getting the clam in a choke hold.

Next, the moon snail will bring out its special tool – the radula.

The radula is used in the same way as you would use a drill. The moon snail inserts it after drilling a perfectly rounded hole in the shell of its prey. A type of hydrochloric acid and other enzymes is released at the same time, dissolving the hard parts, and liquidizing the clam innards. That’s when the snail will stop using the radula as a drill. It becomes a straw like mouth, slurping up the clam smoothie.

The moon snail is edible, although it isn’t the most common snail eaten around the world.

In South Korea, the mollusks are eaten as part of a salad-style dish, known as Golbaengi-muchim. They are also sometimes eaten in Norway, and some North Americans have a taste for them, particularly in chowder-style dishes.

It’s said that, if you like shellfish, you’ll likely enjoy these mollusks . If you don’t, you probably won’t. Some people have likened the taste and texture as being similar to calamari.

As you can probably imagine, being a muscle, the foot of the gastropod can be quite tough and chewy, especially when not cooked properly. If you’re cooking them out of the shell, you may wish to consider tenderising them.

It is recommended to wash them well, twice if you have the time. Leave them in their shells while you’re cooking them, and either steam them, fry them, or use a combination of both for best results. 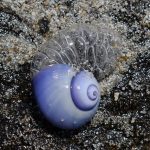 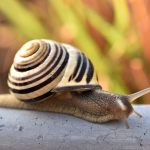