Orthalicus reses is a large, sought-after, air-breathing snail, but it’s also said to be a threatened species in the U.S. (or extinct), and can only be found in two rather specific places in the world, both of which are in Florida.

Lots of websites have lots of things to say about this snail species and how great it would be as a pet, but what’s the truth?

Why don’t we find out?

As the name might lead you to believe, the tree snail Orthalicus, also known by the scientific name Orthalicus reses, is an air-breathing arboreal (living in/on trees) snail, found in tropical locations and climates.

There are two separate species of Orthalicus reses:

Sadly, Orthalicus reses reses (Stock Island tree snail), once a common figure across Stock Island, now has threatened species status, with the population in serious decline. They are prey for several non-native Florida predators such as black and brown rats, iguanas, and even the red imported fire ant (scientific name: Solenopsis invicta).  With just the shell to protect itself, snails quickly fall victim to snail-eaters, including some that aren’t originally from North America.

Orthalicus reses nesodryas (Florida Keys tree snail) is also at risk of becoming an endangered species or listed as threatened.

What Threatens These Snail Populations?

Although there were a range of factors behind the extinction of this snail population, one of the biggest driving forces, and the likely cause of extinction, appeared to be the red imported fire ant. This was discovered after experts closely studies the empty shell of deceased individuals, following the attempt of a recovery plan in the Keys and beyond. Multiple plants for population recovery haven’t been successful.

The rising sea levels in the Florida Keys (Lower Keys specifically) as well as the increased frequency and strength of hurricanes and tropical storms is decimating the snail’s native hammock trees habitat and range. In turn, habitat loss is reducing the population of the remaining tree snail orthalicus.

Local authorities in different areas of the U.S. are working on a recovery plan for both/all species of Orthalicus reses snail, to avoid extinction status.

Other species, such as Orthalicus floridensis, are also struggling in terms of keeping their historic range and populations.

With more than fifty reported color patterns on the spiral bands, you’d be forgiven for getting this treesnail confused with others. The shell is usually a mix of a range of colors, with one to four dark stripes, spiral bands or whirls. This is unlike Orthalicus Floridensis, also known as the banded tree snail, which is a little more muted than its reses relative.

The lighter stripes can be almost brilliant white, and the darker parts can be dark brown to black. There’s a wide range of colors and shades in between the white and brown bands and stripes on the shell, too – pale pink, baby blue, pearlescent rainbow-effect hues, rich brown, flame-like red and orange, emerald-green, and everything in between.

How Big Do Orthalicus Reses Snails Get?

The two Florida Orthalicus reses species are large gastropods. The shell is typically larger than many other species, but not quite as large as the shell of the almighty Giant African land snail. (It’s called giant for a reason!)

Orthalicus Floridensis is the largest of the Orthalicus family of Florida treesnails, and it also has the least colorful and most brown shell. The white bands in reses are more tan-beige with this tropical gastropod, teamed with one to four dark brown stripes, which are referred to as “vertical growth lines”.

Because of its threatened (and potentially extinct) status and unsuccessful recovery efforts, Orthalicus reses reses (the Stock Island tree snail) is federally listed as endangered biota of Florida. This means it is likely to be unlawful for you to buy, hunt, trap, own, breed, or otherwise get involved with the tree snail of North America. Populations are down, so efforts are in place for recovery.

According to the Fish and Wildlife Service…

It is advisable to check the status, restrictions and laws on reses land snail ownership, and rare and endangered biota, in your location before purchasing. The U.S. Fish and Wildlife Service is the best place to start. The website will contain details of current and ongoing recovery plans.

Other species of the tree snail Orthalicus reses (and other non-Orthalicus treesnails, such as Liguus fasciatus) are relatively easy to buy, especially online. Once again, it is recommended to check with The Fish and Wildlife Service (U.S.) and South Florida Ecological Services (or similar, local to you) to ensure you are making a smart pet purchasing decision.

Feeding your Orthalicus (reses) could prove difficult. You will also need to consider whether or not it will be easy for you to get smooth-barked trees and shrubs or stumps/branches to add to your snail habitat, such as gumbo limbo trees.

If you do decide to invest in Orthalicus reses, you should know that they are only alert and awake for approximately half of the year, when the weather is wet. In local areas (Florida), this would mean early May to late December (mid-to-late summer), and perhaps a little bit extra either way.

For the rest of the year, when the weather is dry, Orthalicus reses can go into a state of almost hibernation, which is called estivation.

What is Estivation in Snails?

Some snail species will attach themselves to trees and shrubs (or other surfaces), with a watertight seal, for months at a time. This prevents the land mollusca of North America from drying out in the Key West heat and allows them to survive periods of extreme weather, such as very hot temperatures and drought.

This slow-down process is called estivation. It is sometimes referred to as “dryness sleep”.

What is the Life Cycle of Orthalicus Reces Snails?

When this snail doesn’t have to deal with habitat destruction and other threats, it can live in the range of two to three years.

The use of certain pesticides, particularly those that are used in the control of mosquitos, has also negatively affected this species, as well as other tree snails, including Liguus fasciatus, other Liguus and Orthalicus species, Drymaeus snails, other snail species, and even other wildlife.

What Do Orthalicus Reses Snails Eat?

The diet of Orthalicus reses is not yet fully understood, and its diet is presumed to be similar to that of other land snails, such as Drymaeus multilineatus, also known as the lined treesnail and also found in the Florida Key area.

It is believed that the Florida tree snail eats lichens, algae, and various forms of fungus that grow on the trees that make up their habitat, alongside any other debris they deem to be edible. This is according to the Florida fish and wildlife service.

Land gastropods, generally, are said to eat a diet that consists of vegetables and fruits, worms and other insects, leaves and grasses, decomposing animal and plant material, flowers and other plants, the bark of trees, fungi, algae, and more. They potentially eat other snails, too.

The diet of individual Orthalicus reses snail species will usually vary depending on location and what is available. Florida tree snails are, as the name suggests, from Florida, so they will eat whatever can be found in that region, similar to that of Liguus fasciatus (Liguus tree snails) and other Florida tree snail populations.

What is a Suitable Habitat for a Florida Tree Snail?

In order to keep Orthalicus reses populations fit and healthy, you would need to recreate the native conditions in the Florida Keys. The climate in south Florida is tropical-maritime: mild temperatures, with a dry and rainy season, and very small fluctuations between summer/winter temperatures.

Florida tree snails do not like the cold. South and west Florida very, very rarely sees cold enough temperatures to cause frosty mornings, ice or snow. This snail, much like other gastropods, is very sensitive to changes in its habitat. If the temperature fluctuates too much, for example, the Florida tree snail can quickly become unwell.

You will also need to consider the native trees of the U.S. and, specifically, the Florida Keys. These trees include native hammock trees, other hardwood trees, and smooth-barked trees in the Key areas. Low-lying leaf litter and shrubs are also necessary, to allow for smooth and protected breeding. Then, the eggs hatch under the cover of the low-lying litter and shrub cover.

What Snails Are Similar to Orthalicus Reses?

The two species of treesnail, both found in Florida, are very similar in many ways. They look alike in terms of the brown color patterns, but one is rare and potentially on the endangered or threatened species list, and the other (Achatine fulica) is a pest species that needs to be controlled. It was, at one point, completely eradicated from Florida, where it posed the biggest problem as an invasive species. Unfortunately, as of 2022, the status has been updated because the species was noted as being noted back in the area.

The Drymaeus family of gastropods are also air-breathing, arboreal, and found in Florida. Drymaeus sulphureus, Drymaeus dormani (manatee treesnail), and Drymaeus multilineatus (lined treesnail) are just a few similar looking land-based molluscs that can be found in Key areas of Florida, and across the south and west. 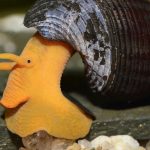 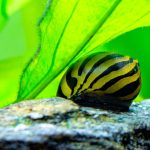 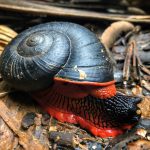